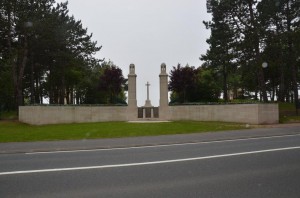 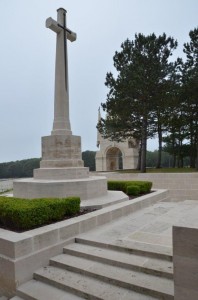 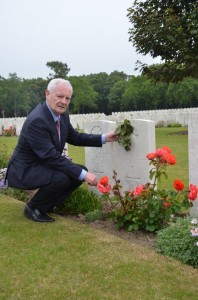 A fine sycamore towers in the front garden of a small house in the Donegal village of Gortahork.

People can’t remember a time when it wasn’t there.

Before he travelled to France last weekend for the Battle of the Somme commemorations, Minister for the Gaeltacht Dinny McGinley heard the poignant story of this stately tree. Dinny was visiting his old friend Paddy McGowan who told him about his uncle who left Gortahork in 1914 to join the British army. On the morning before he departed, 18-year-old John McGowan planted a sycamore sapling as a reminder to his family to keep him in their thoughts.

The young Donegal man was first sent to the Dardanelles, where he sustained a hand injury. After recuperating, he was transferred to the Somme, never to return home.

But the tree he planted now soars above the garden, 99 years after he planted it.

When Dinny told Paddy he would be representing the Government at the commemorations, his friend asked him to try and locate Uncle John’s final resting place. “Will you take a branch of the tree with you, and if you find him will you place it on his grave?”

Dinny was happy to oblige. Which is how it came to pass that the Minister of State travelled to France accompanied by the special branch.

Last Sunday, in the company of Niall Leinster of the Somme Association, Dinny travelled north to Étaples Military Cemetery in Pas de Calais. There, after a little searching, they found the grave of “5169 Private J McGowan, Royal Munster Fusilier”. He died on August 2nd, 1916. Dinny described the emotional moment when he stood at the headstone.

“I said: ‘Hello John, I bring you greetings from your nephew Paddy, who is now 90 years of age. Even though he never knew you, he has fond memories of you through all the stories he heard down through the years. They never forgot you. Paddy told me to be sure and tell you that the tree you planted the morning before you left is in full bloom and covers more than half the garden. It’s one of the finest trees in all of Gortahork and the surrounding area. And I’m falling down on my two knees now and bringing you a branch of your own sycamore tree’.”

Then Dinny said a silent prayer and laid it by the headstone – John McGowan’s final bough. And he left the grave of Paddy’s uncle from Gortahork with these parting words: “Codladh sámh i measc na laoch go raibh agat a John.” (Sleep peacefully among the warriors, John)