Stand up for the Red, White and Blue: Part 1 – The British Red Poppy 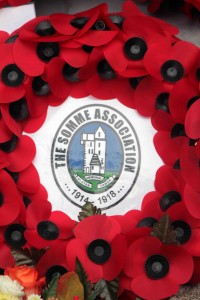 The Blood Swept Lands and Seas of Red exhibit at the Tower of London in 2014 on the 100th anniversary of the beginning of World War I consisted of 888,246 ceramic poppies, one for each British and colonial death.

The British Red Poppy, the German White Rose, the French Blue Cornflower….Stand by the Red, White and Blue…Eternal symbols of Resistance to the Nazis, yesterday, today and tomorrow.

On Friday 29th October, 2010 Royal Irish Regiment soldier Ranger Andy Allen, now MLA for my constituency of East Belfast, helped launch the Royal British Legion’s Poppy Appeal in Northern Ireland. This was the second year running Ranger Allen had been the public face of the Ulster Poppy Appeal and we are proud of him, his comrades and their families.

Poppies of several varieties have been known to medicine since the dawn of human civilisation. The ancient Egyptians used extracts to calm anxious children. The Assyrians, Greeks and Romans said they were sent by the Gods to relieve pain and suffering. And so they still do. The Opium Poppy (Papaver somniferum) was native to Anatolia (modern Turkey), but has since spread throughout Asia. The capsule of this White Poppy secretes a milky fluid from which morphine, heroin, codeine and papaverine are all derived. This poppy was known as the Flower of Forgetfulness to the Ancients. Legend has it that the great Mogul Warrior Genghis Khan caused the White Poppy to turn Red by the slaughter of his enemies on the Battlefield.

But the Red Poppy of Remembrance, which we wear on 11th November every year, has a different origin. This is the Corn Poppy or Flanders Poppy (Papaver rhoeas), the extract of which has only a mild sedative effect. Before he himself succumbed to pneumonia and meningitis the Canadian Doctor Lt Col John McCrea wrote about the Corn Poppy in his famous poem In Flanders Fields at a dressing station north of Ypres on Essex Farm in 1915.

In Flanders fields the poppies blow
Between the crosses, row on row
That mark our place; and in the sky
The larks, still bravely singing, fly
Scarce heard amid the guns below.

We are the Dead. Short days ago
We lived, felt dawn, saw sunset glow,
Loved and were loved, and now we lie
In Flanders fields.

Take up our quarrel with the foe:
To you from failing hands we throw
The torch; be yours to hold it high.
If ye break faith with us who die
We shall not sleep, though poppies grow .
In Flanders fields.

This was the red poppy used by the widows of French ex-servicemen to raise money by those incapacitated by the War and through them has become the symbol of sacrifice and remembrance of the British Legion, the Canadian Legion and the Anzacs. Because of the efforts of Moina Mitchell, it has also become a symbol in the United States of America for the Veterans of Foreign Wars and the American Legion. Thus while the White Poppy remains the Ancient Flower of Forgetfulness, the Red Poppy reminds us that we must never forget those who have given their health, happiness and lives for our freedom.