Stand up for the Red, White and Blue: Part 3 – The French Blue Cornflower

The British Red Poppy, the German White Rose, the French Blue Cornflower….Stand by the Red, White and Blue…Eternal symbols of Resistance to the Nazis, yesterday, today and tomorrow

The French Blue Cornflower or bleuet de France is the symbol of memory and solidarity, in France, for veterans, victims of war, widows, and orphans, similar to the typically British remembrance poppy. 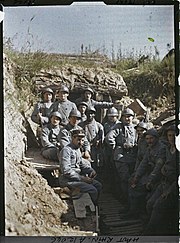 In the language of flowers, the cornflower symbolizes delicacy and humility, and indicates that a message has a pure, innocent, or delicate intention.

The cornflower – like the Red Poppy – continued to grow in land devastated by the thousands of shells which were launched daily by the entrenched armies of the Western Front. These flowers were often the only visible evidence of life, and the only sign of colour in the mud of the trenches.

At the same time, the term “bleuets” was used also to refer to the class of conscripted soldiers born in 1895 who arrived in the lead-up to the Second Battle of the Aisne, because of the horizon blue uniform worn by French soldiers after 1915. The uniform worn by these young recruits, many of whom were not yet even twenty years old, was distinctive because it marked a break from the disastrous garance red pants worn by older soldiers, which were part of the standard uniform prior to the First World War.

As the war dragged on and the novelty of the term faded, the title endured because the uniform which fresh arrivals wore into the trenches was still new and brightly colored, in contrast with the mud-stained uniforms of veteran troops.

The popularity of the term was such that the image became a potent symbol in postcards, posters, songs, and poems: 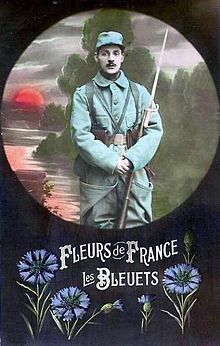 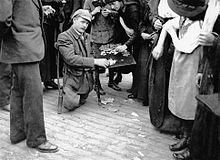 A war amputee selling bleuets on the Champs-Élysées, 4 July 1919.

The origin of the badge dates to 1916. Suzanne Lenhardt, head nurse in Les Invalides and widow of a Colonial Infanrty captain killed in 1915, and Charlotte Malleterre, sister of General Gustave Léon Nioux and the wife of General Gabriel Malleterre, both moved by the suffering endured by the war wounded for whom they were responsible and faced with the necessity to give them an active task, decided to organize workshops where cornflower badges were made from tissue paper. These badges were sold to the public at various times, and the revenues generated by this permitted them to give these men a small income. They gradually became a symbol of the rehabilitation of soldiers through labour.

On 15 September 1920, Louis Fontenaille, president of Amputees of France, presented with the support of the International Federation of Veterans in Brussels a project designed to make the bleuet the perpetual symbol of those for France.

In 1928, after the President of France Gaston Doumergue gave his patronage to the bleuet, sales gradually spread through the entire country. By 11 November 1934, 128,000 flowers were sold. From 1935, the Republic made the sale of bleuets on Remembrance Day official throughout France.

After the Second World War, in 1957, a second day for commemoration was created on 8 May, the anniversary of the surrender of Nazi Germany.