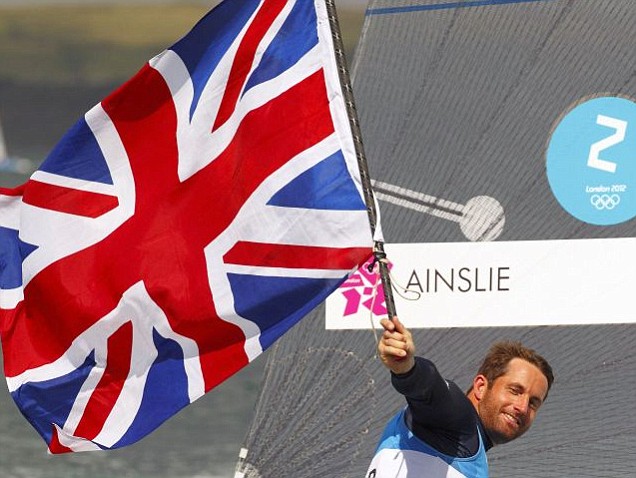 Four time Gold Medal Winner Ben Ainslie flew the flag once again at the Games closing ceremony
The 35-year-old’s victory in the Finn class at London 2012 saw him become the most successful sailor in Olympic history, as he added it to the Finn golds he won in 2004 and 2008, and his 2000 gold and 1996 silvers in the Laser class.The closing ceremony, called A Symphony of British Music,celebrated music as one of Britain’s strongest cultural exports over the last 50 years.

Entering the Olympic Stadium, the audience was treated to a vision of working London wrapped in newspaper as they were taken to the heart of the capital’s busy rush hour.

As well as typically rainy weather forecasts and stocks and shares, the reams of print celebrated British literary greats from the earliest surviving Anglo-Saxon poetry to current poet laureate Carol Ann Duffy, with extracts from Shakespeare and Milton along the way.

A series of ramps – covering the track where Mo Farah and Jessica Ennis made history – formed a black and white Union Jack, the first of many versions of the flag to feature in the extravaganza.

Unwrapped on a newspaper rubbish truck, singer Emeli Sande, who performed in the opening ceremony, delighted the crowds with hit song Read All About It.

Percussion group Stomp emerged to swing from the scaffolding, playing models of the capital’s landmarks including Big Ben and the London Eye as if they were instruments. 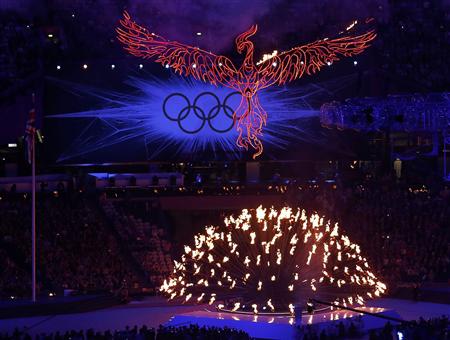 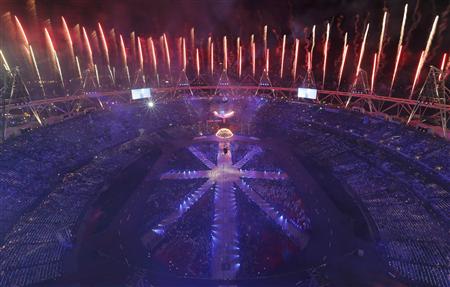 Fireworks explode during the closing ceremony
Victoria Beckham wrote: “We did it!! I love you girls so much!!!!!”, while fellow Spice Girl Mel B said: “Soooo much fun!” 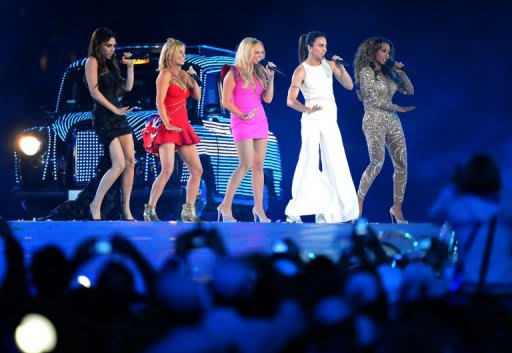 Before the event kicked off, Games organiser Lord Coe urged the nation to “party, party, party” and Big Ben’s chimes rang out across the stadium in Stratford, east London, to mark the start of the pre-show.

The handover from London 2012 to the Rio 2016 team took place along with the extinguishing of the Olympic Flame to signal the end of the Games.

Shortly before the closing ceremony started, Britain’s athletes completed their most successful Olympics for 108 years with a silver medal in the final event of London 2012.

Samantha Murray took second place in the modern pentathlon bringing Team GB’s final tally to 65, with an incredible 29 golds, 17 silver and 19 bronze, and the team in third place in the medal table.

Before the ceremony even kicked off, the Queen congratulated the athletes of Great Britain and the Commonwealth, saying their efforts had “captured the public’s imagination and earned their admiration”.

“The outstanding performance of Team GB, in achieving the greatest Olympic success since 1908, will, I am sure, have inspired a new generation of Olympians and reminded us all how sport unifies communities and nations,” she said.

“I congratulate, too, the organisers of the Games, as well as the thousands of volunteers who have epitomised the Olympic spirit through the warm welcome they have shown to the sporting teams and spectators from all around the world.”Games at the Olympic Stadium.